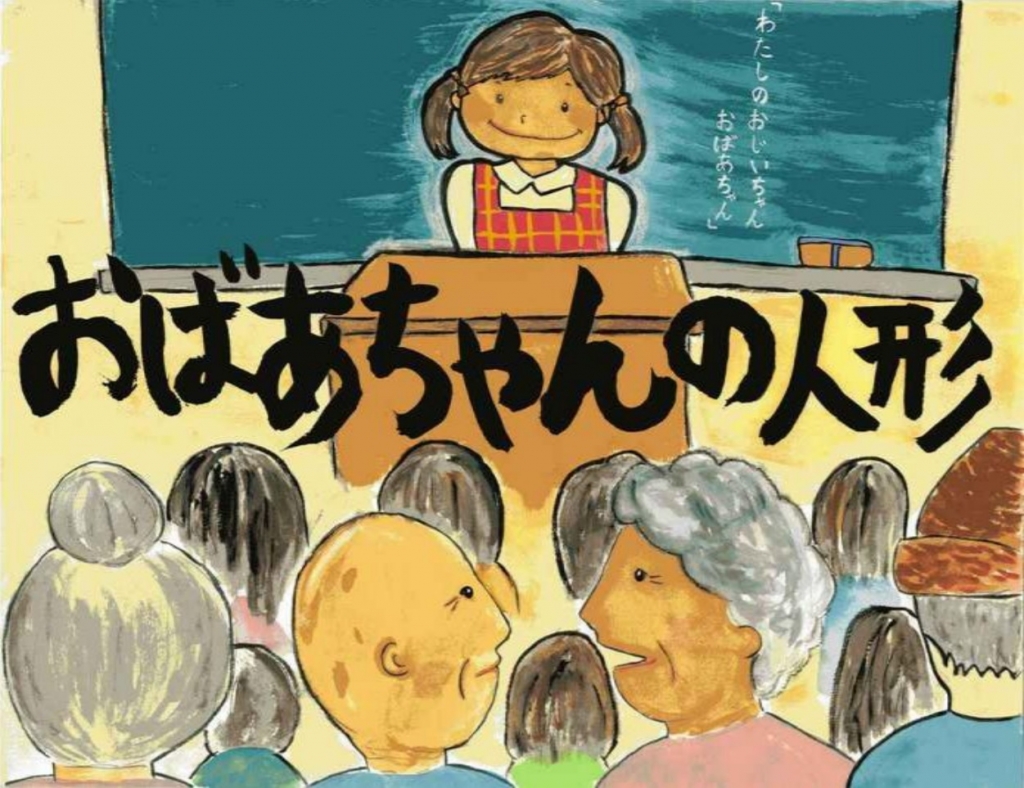 Teacher: Good morning. Today is “Exchange Day", so I asked your grandfathers and grandmothers to come to our classroom.

Teacher: I would like you to read the compositions about your grandparents that you wrote.

First of all, let’s hear from Haruko Yamashita. 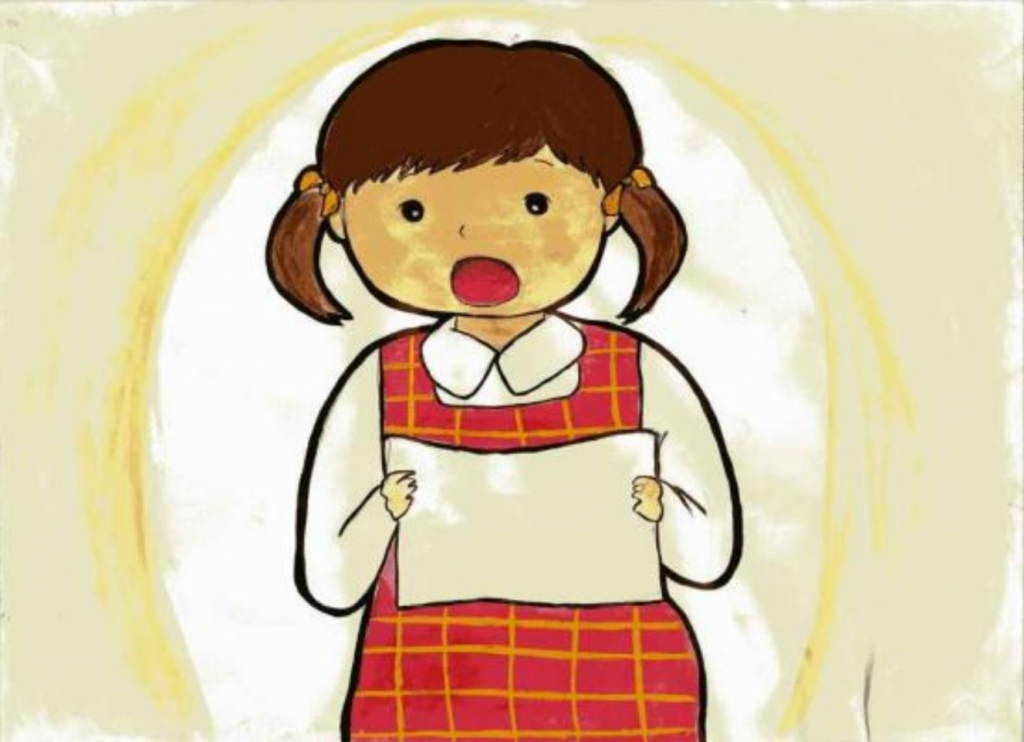 Haruko: “My Grandma". My grandma was a victim of the atomic bomb 63 years ago. She is now speaking on behalf of all the victims, not only at schools but also abroad in order to convey the damage and the importance of peace.
When I go to my grandma’s house, she often tells me the story.
Grandma always smiles, so I love her.
But the other day, I saw my grandma crying for the first time.
-Pull- 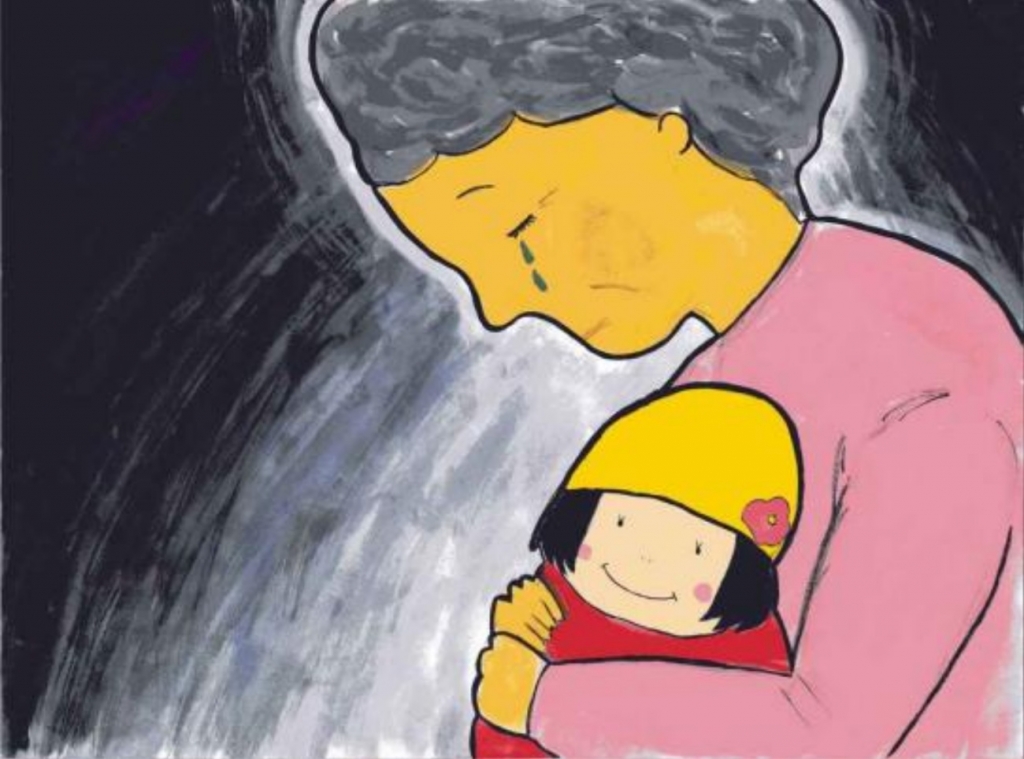 Haruko: I asked my grandma, “What’s wrong?",
(Leave a little space)
Grandma: I’m sorry to surprise you.
Sometimes when I see this doll that you played with when you were little, it reminds me of something.
I also used to play with a doll that looked a lot like this.
I cherished it, but it got burned up…
Haruko: Oh!? Why?
Grandma: Well…
-Pull-
(Leave a little space) 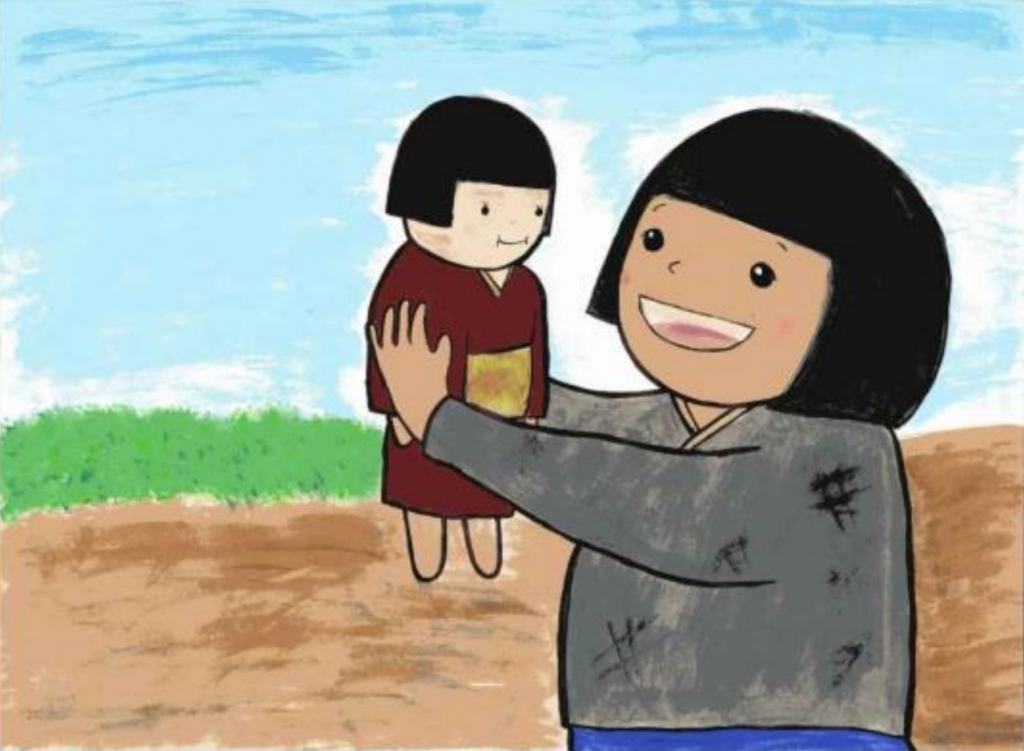 Grandma: I lived in Tokyo until I was five.
Do you know what an “air raid" is?
Enemy planes used to fly in and drop bombs, but it got worse, so I fled to Hiroshima, where my relatives were.
I loved dolls, and I named one doll made from rice husks, “Tae-chan". I was always with her.
I was playing with Tae-chan as usual that day.
The weather was very sunny.
Right at the moment I was going to go outside with Tae-chan to take her on a piggyback ride…
-Pull quickly- 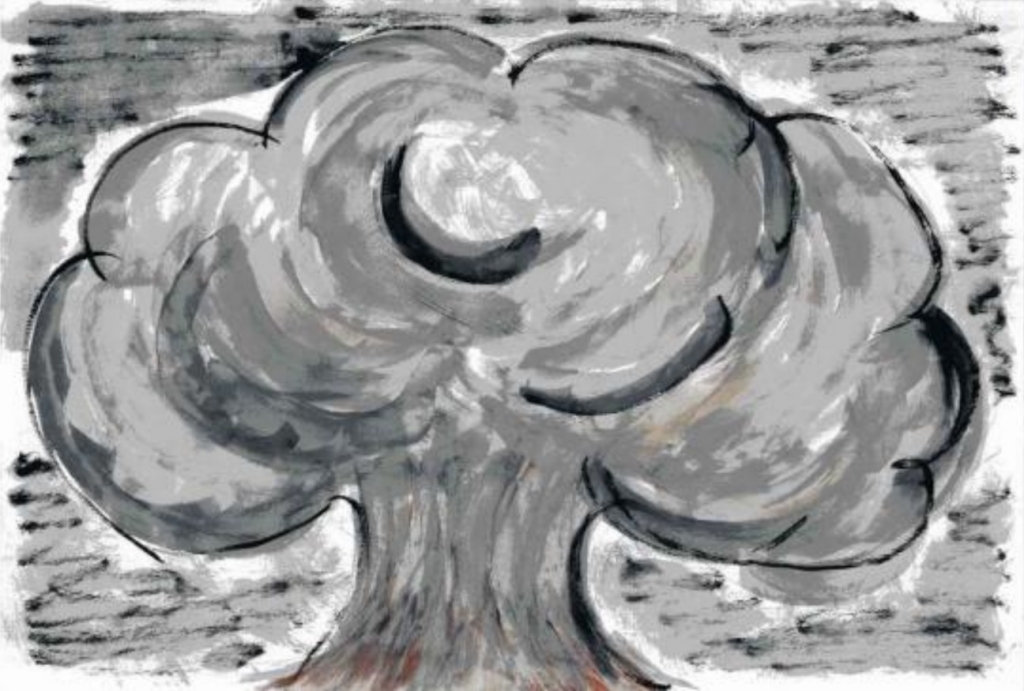 Grandma: There was a flash of light all around.
It was a strong light, as if many suns had fallen.
After that, at the same time as I heard a loud bang, I was blown away by tremendous heat and shock.
I had no idea what was happening or what the situation was.
-Pull- 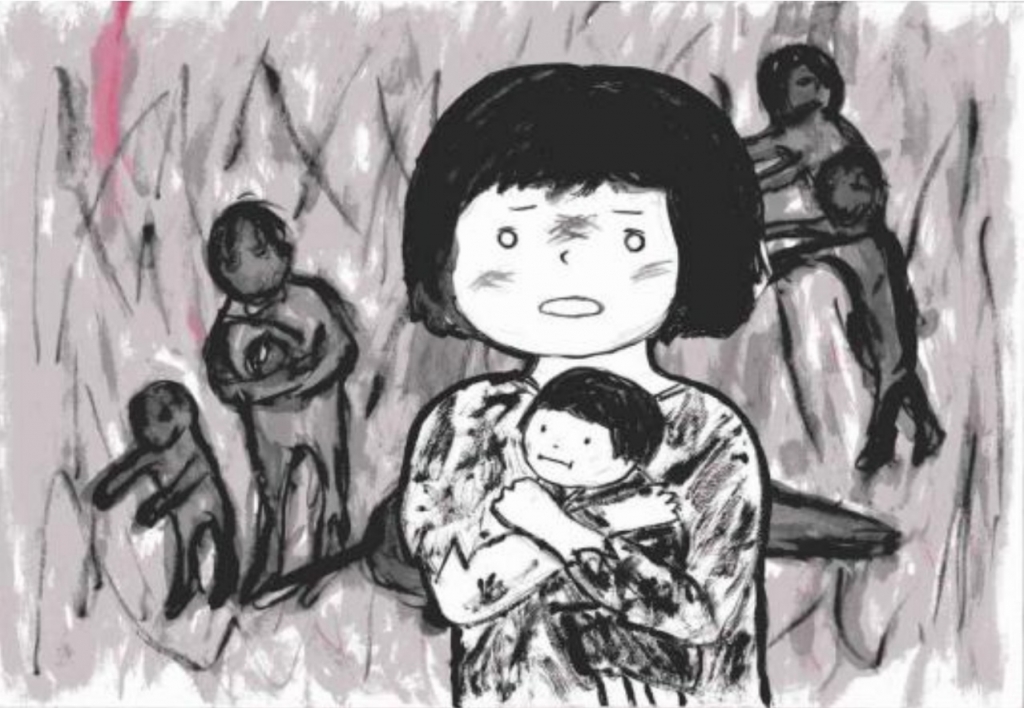 Grandma: Tae-chan was beside me.
Rumi: “Tae-chan” … At that time, I heard my mother’s voice.
Mom: “Rumi! Quickly! Get out of here!”
Grandma: I hugged Tae-chan and ran away, being pulled by my mother.
Many things were on fire.
A bird that had turned black in a squashed cage.
The dogs, cats, and horses that should have been around, were also charred and dead.
People were walking around with the skin of their burnt hands hanging down, and people were turning black and moaning “water … water …".
I was pulled along by my mother, and ran away.
-Pull- 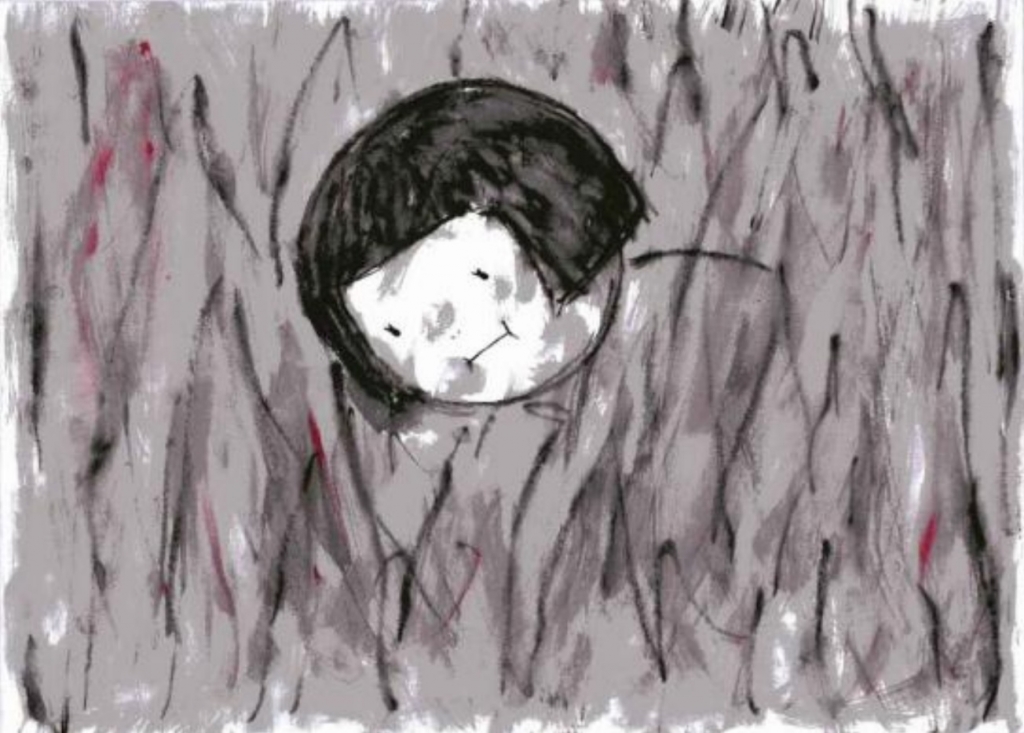 (In a tense state)

Grandma: While I was running away, I stumbled and dropped Tae-chan.

(Leave a little space)Grandma: Seeing the doll I always cherished burning, I realized for the first time there was something terrible happening.
With my mother pulling my hand, I just ran away to where there was no fire.
-Pull- Grandma: I didn’t know how much time had passed or how far I had escaped.
(With a space)
Tae-chan died.
The birds and cats died. My city died, too.
They were all dead. Everyone was dead.
-Pull- 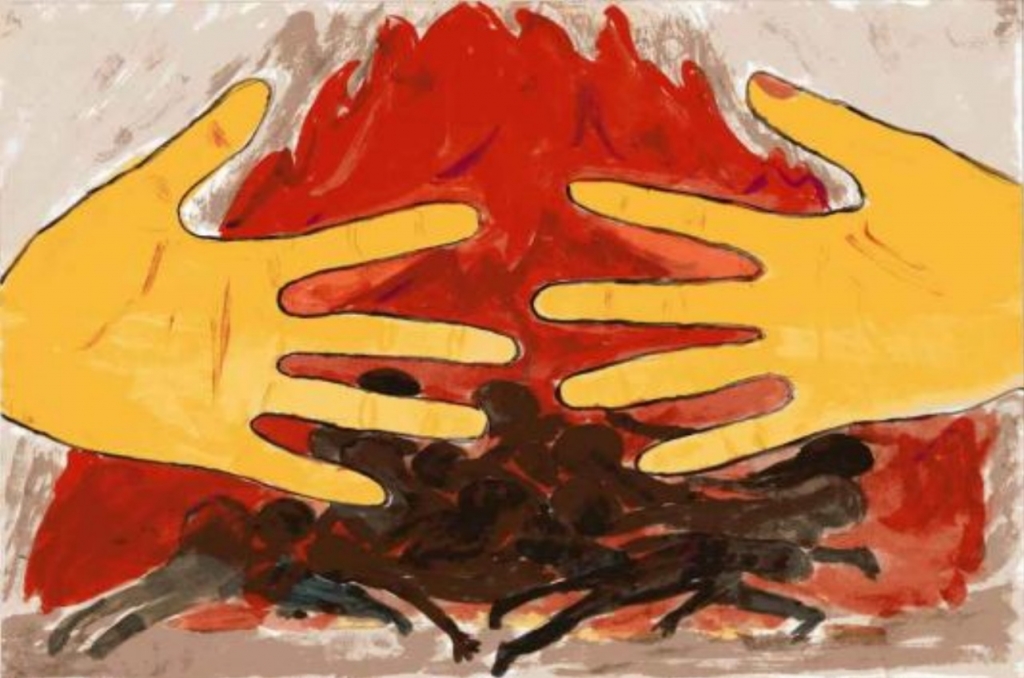 Grandma: It smelled so bad that I couldn’t breathe.

It was an indescribable odor that I had never smelled before.

But I couldn’t take my eyes off them. 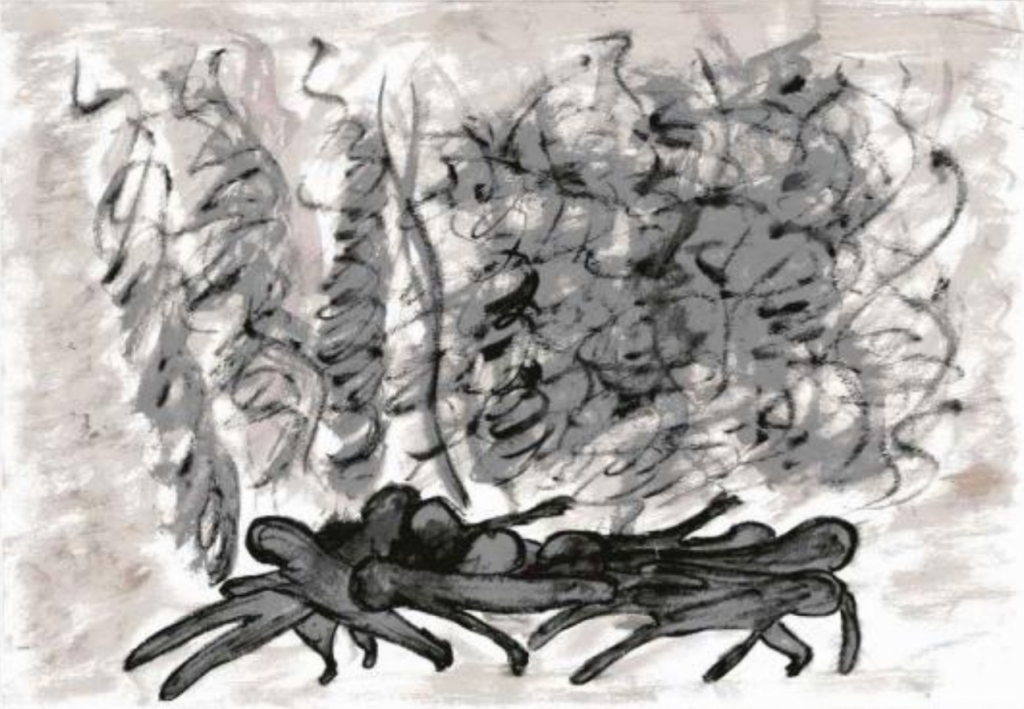 Grandma: Mom flew in and blindfolded me.
Then I fainted.
The scene was probably too shocking for children.
By the time I came to, I had no memory of that moment.
One day, when I saw your doll, the memory of the atomic bomb came back to me.
It came back after 58 years …
I still remember it no matter how many times I see it.
This doll just looks like that Tae-chan …
(With a space)
An atomic bomb was dropped on Hiroshima on August 6th, 1945.
Three days later, on August 9th, an atomic bomb was dropped on Nagasaki as well.
So many people were killed.
On August 15th of that year, Japan surrendered, and the war was finally over.
-Pull- 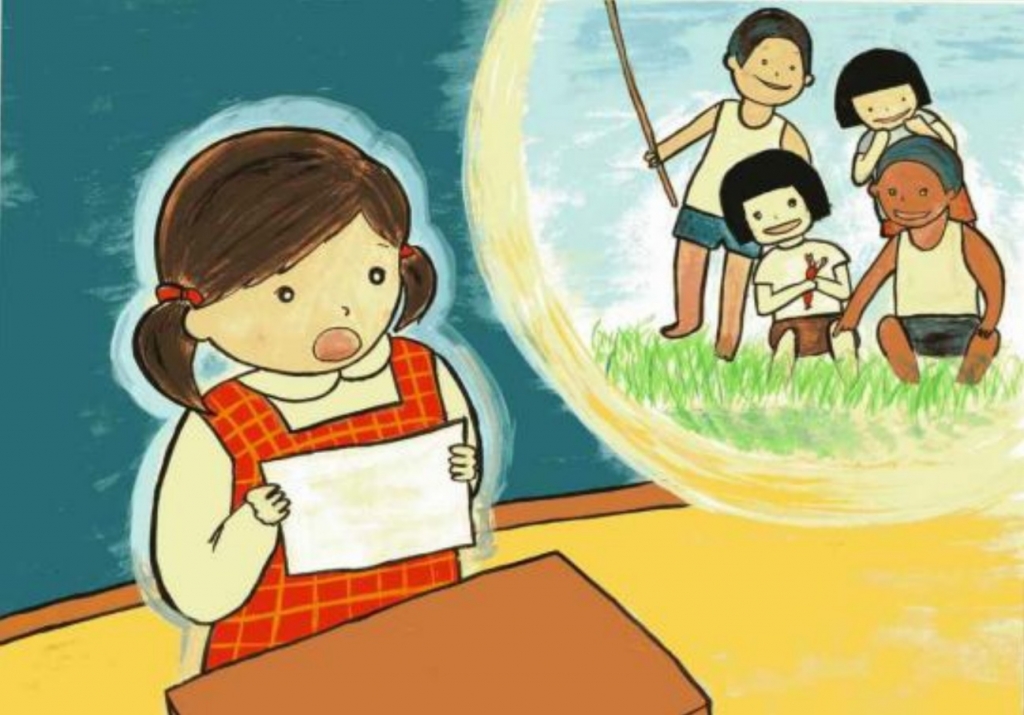 Haruko: After that, my grandma moved to a relative’s house in Nara and lived there.
Her life there was peaceful, playing in the river and fishing for crayfish in the rice fields.
One day, she was bitten by a leech while she was playing in a rice field.
When her other friends were bitten, the bleeding stopped immediately, but only my grandma’s bleeding did not.
It could be the effect of the atomic bomb.
Not only my grandma, but also other people who were exposed to the atomic bombs are more likely to have difficulty healing from injuries, become anemic and are prone to cancer.
There are many people who are still suffering, even if they look fine.
My grandma’s story was shocking, but I thought we shouldn’t forget this fact.
-Pull- 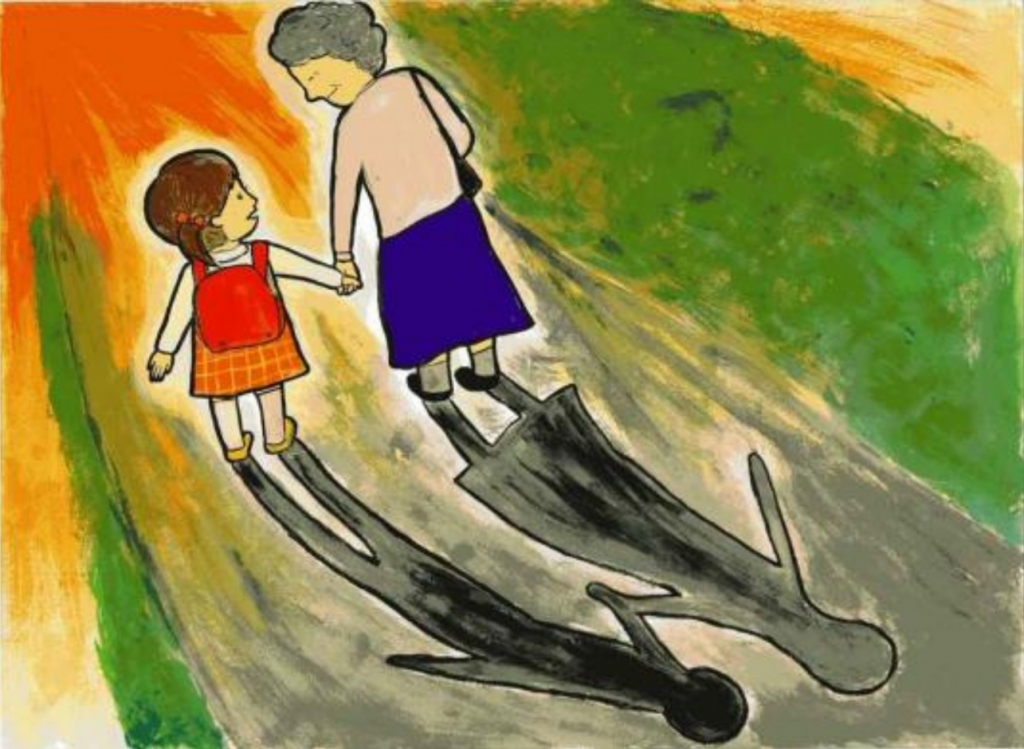 Translator: Naoya Takahashi
You can download the PDF files from the buttons below:
My Grandmother’s Doll (Image) Download PDF