IT  WAS PITCH BLACK UNDER THE MUSHROOM CLOUD 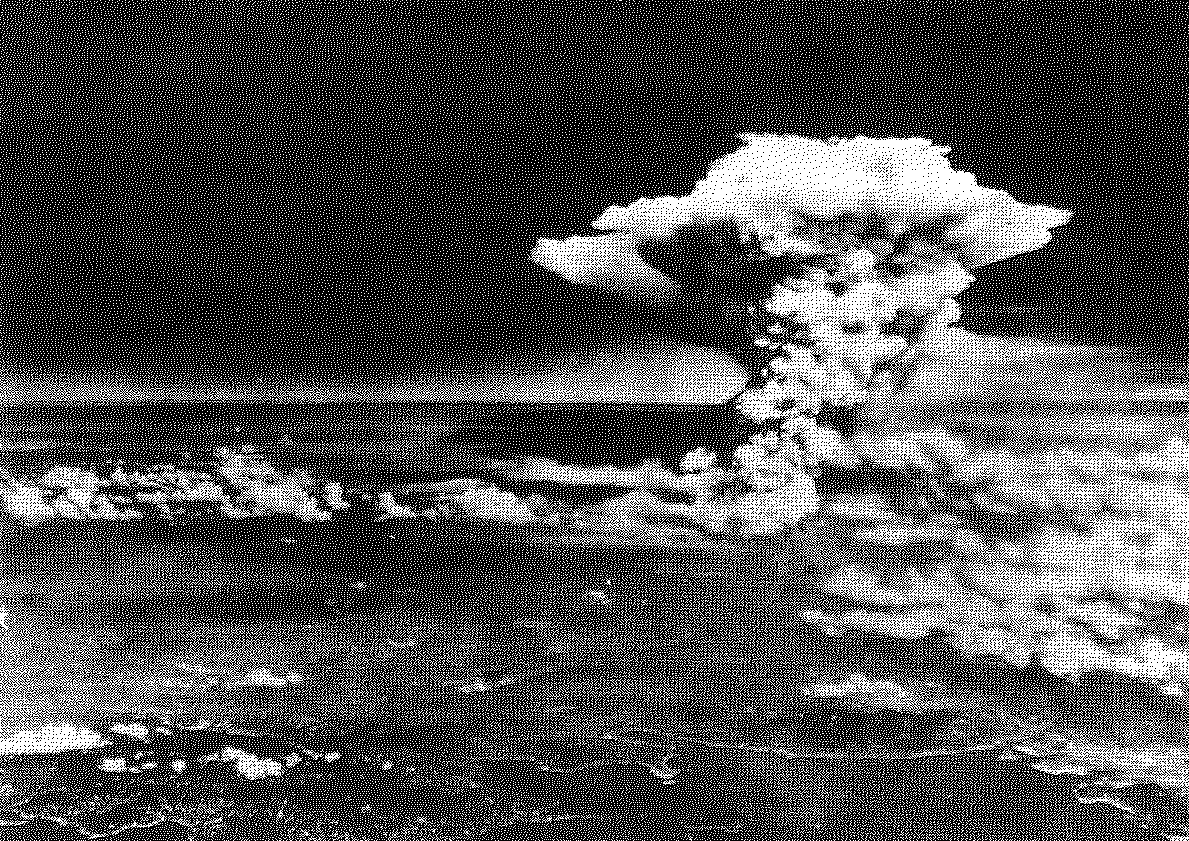 When I was an elementary school student, none of the other students actually called me Sunao.

(After the atomic bomb was dropped, the mushroom cloud rose high into the sky before the Seto Inland Sea.)

Allow me to introduce myself.  My name is Sunao Tsuboi.  When I was an elementary school student, none of the other students actually called me Sunao.  Instead, I was called   Naoshi, Nao, Tadashi, or Choku.  It was as if they thought I wasn’t human.

So I didn’t like any of those names they called me.  However, after many years have passed since A-bomb was dropped on Hiroshima, and after my parents died, there was nobody left to call me by my proper name.

​At that time, I thought to myself “Why did my parents name me Sunao? Finally I realized the answer: my parents wanted me to live my life to the fullest without leaving the path of righteousness.  After that, I thanked my parents, and could say, “I’m Sunao" with confidence. 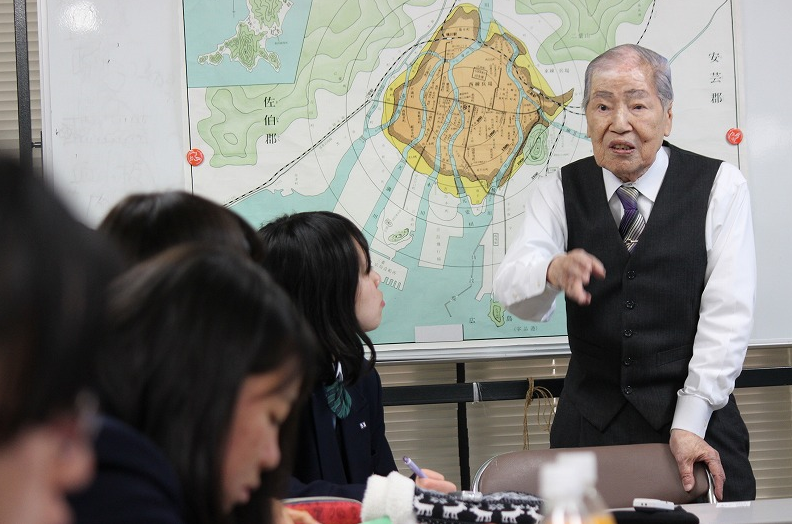 Let’s talk now about what actually happened at that time.

Look at the map, please. On August 6th in 1945, I was caught in the explosion of Atomic bomb and exposed to the radiation near the city office of Hiroshima. The place was about 1 km from the hypocenter.

I was 20 years old, and a third-year student of the Hiroshima Industrial Technical School（now the Engineering Faculty of Hiroshima University）.

I was on my way to school  It was decided that I would graduate in September, so that meant I would have no summer vacation.

Almost 100% of the people who were within a 500m radius from the hypocenter died. And about 60% of the people who were within a radius of 1km died. At that time, I was blown over by a strong wind from my left side.  I don’t remember what had happened from that moment.   It was dark around me.  I saw the mushroom cloud rising high.  Also, all wooden houses were destroyed, and large amounts of dust from the walls appeared.  I couldn’t see 100m ahead.  I didn’t even know which way was east or west.  As I looked at my body, my pants were blackened below my knees.  My skin was dark black because of the burns. And it’s bleeding profusely. “Oh hell!” I thought to myself. Also, the darkish blood was flowing like water from my waist. “I wanted to get revenge on the US” At that time, I thought to myself, “How dare you!" “I will never forget this. I will do everything I can to get my revenge. The U.S. better get ready to feel my wrath."  I passed the inspection to enter the military, and was to join a special attack force.  I’ll never forget what America has done. Death to America! I’ll get my revenge.  I grew up with a military education, so I thought such a thing. However, I didn’t know what to do.  I didn’t know where to run.

After while, I decided to head for my college campus.  On the way there, I saw a young female student, like you.  She was running away with her right eye hanging out and dangling around.   As for me, I was on fire from head to toe.  I felt pain in my back, so I took off my shirt and realized that it was still burning.  I had been running with a burning shirt the whole time.  Corpses were piled up all around, blacked from the flames.  Horses had fallen over, and streetcars, too.  These bodies were in such a bad shape that their faces were no longer recognizable.

It was normal to have lost an arm.  There was nothing left of anything below the waist. We couldn’t find head of some bodies.  This was how it was everywhere I looked. The female student whose eye had popped out also died, I guess.  While running away, somebody said to me, “Help me!"

It was like I left him for dead. I simply couldn’t help him. The river had become “a river of death." I said, “Please give me some water.” People were shouting, “Wait! If you drink water now, you’ll die.”  We were given such an education in school.

Even young children. It didn’t matter that they could swim or not.

So, everyone died.   The river was full of dead people. It had become a river of death.

“I visited a relative but…"

I said, “I‘m Sunao Tuboi. Sunao! Sunao!”  But she said, “No, Sunao is thinner and better looking. Sunao doesn’t look as bad as you do."  So I didn’t think that she believed me by just saying “I’m Sunao."  In the blast, my aunt’s house was also damaged.  I took a look at it. “There was a piano on the second floor of this house where I was excited to play with Keiko with joy when I was a boy. I am that boy, Sunao. " I said this to myself out loud.  Then, my aunt exclaimed, “Oh, you know all about my second floor! You really are Sunao!”

Then she said, “I’ll go look for some medicine, so please wait here."   That is what she said, but in reality there were no medicines.   So, I thought that if I waited here untill she came back, I would die. So I said, “Aunt, take care of yourself. I must go to the college now.”

Even so, she begged, “Please stay, please stay." She tried to stop hard me. I thought that I had to survive, I had to kick my old aunt, even though it was cruel. Otherwise she wouldn’t let me go.  If she didn’t let me go, that would have been the end of me. So I ran away from there.

After a while, I thought about death.  Then I decided to die.  At that time, there were some women standing there and talking to each other.  “There is a makeshift clinic near the Miyuki-bashi bridge.  Let’s go there to get checked."  When I heard that, I thought, “It’s only 200 meters away. I can make it. Let’s go!"  I think you guys could do it, easily.   But it took over an hour for me to get there.  The houses were collapsed and its made a shadow around them.   Next, I thought I should go to that shadow.  I went to crawl in it.

I moved forward little by little between shadows. Finally I arrived at the foot of the bridge. But, there wasn’t any temporary clinic there.