TO THE WORLD WITHOUT NUCLEAR WEAPONS, NEVER GIVE UP! 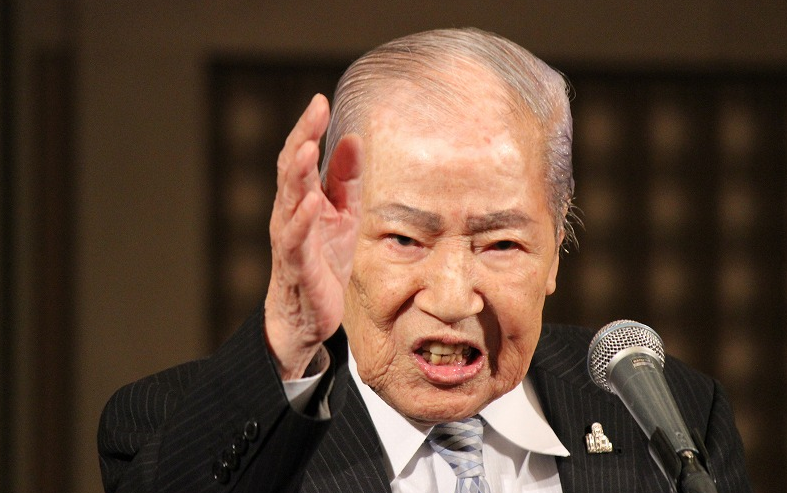 Listening to Opposing Opinions When I retired at the age of 60, I was told, “Don’t leave Peace Education." At the time, there was no executive director of the Japan Confederation of A- and H-Bomb Survivors organization, so I took on the position. 30 years have passed since then. I’ve been to 21 countires so far, such as Africa, Europe, Pakistan, China and North Korea. And I’ve been to the US eight times. If a nuclear test is happening there, I have to go and say “Stop!”.

(April of 2015. At the conference titled “10 Years Without Poritical Progress" sponsored by Hiroshima Hidankyo, Mr. Tsuboi said to the audience “Never give up!" (Hiroshima International Conference Hall))

It is important not to select opponents. I listen to their opinions even if they are different from mine. American students often say, “Dropping the atomic bomb was right.”  I listen at first. Then I say, “Oh I see. I see.”

After words, I reply. “I don’t think so.  How can you say that an atomic bomb killing many people is right?" It’s not enough just to tell my friends. We shouldn’t only think about ourselves, but also about our opponents.  There are many repugnant things in reality.

But if we have to deal with these bad things, we shouldn’t give up. So I say, “Hey, you are a human being, and so am I. So we should shake hands." In this way, we must not have the heart to give up.

So I say more coolly, “Never give up." 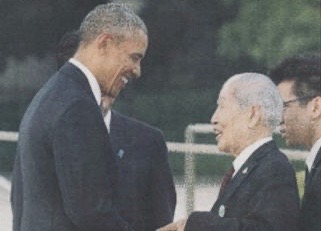 It was 7 years ago that I sent a letter to President Obama for the first time. “Please come to Hiroshima.”

I heard that he made a speech in which he said “Let’s make a world without nuclear weapons” in front of many people in Prague, Czech.

I was convinced that I could work hard with him.  Since then, I kept sending letters every year.  (Visiting Hiroshima on May 27th) Just before the ceremony began, I had a chance to speak with President Obama. Mr.Tsuboi introduced his students to foreign newspaper articles: Nakaku, Hiroshima City (in Hiroshima hidankyo office)/12th March 2017 Picture on left : Mr. Sunao Tsuboi was the first Hibakusha to shake hands with President Barack Obama when President Obama came to Hiroshima.

I was so nervous that I couldn’t talk well even though my part is only one or two sentences. It was like my heart was divided into two or three pieces.  I was thinking about what to say. Then I decided to talk about the “past, present, and future.”
“I’m Sunao Tsuboi , an atomic bomb survivor, and I’m 91 years old. We will not ask you for an apology.  Welcome to Hiroshima.” I said it like that. This is the past.
Then, his expression relaxed. “You visited the Peace Memorial Museum but it was only for a short time.  If you had wanted to understand the whole of it, you have to see the tragedy and meet the atomic bomb survivors.

You also must listen to the survivors’ stories. Well, I had preached something about the present. “But you will leave office and be an ordinary person next January. So you will have more time. Please come to Hiroshima again.” This is the future.
This dialogue was not the goal but it was start.  I said, “We will also want to create a world without nuclear weapons”  His hand that I was shaking then became stronger.

Beyond Hate to the Future 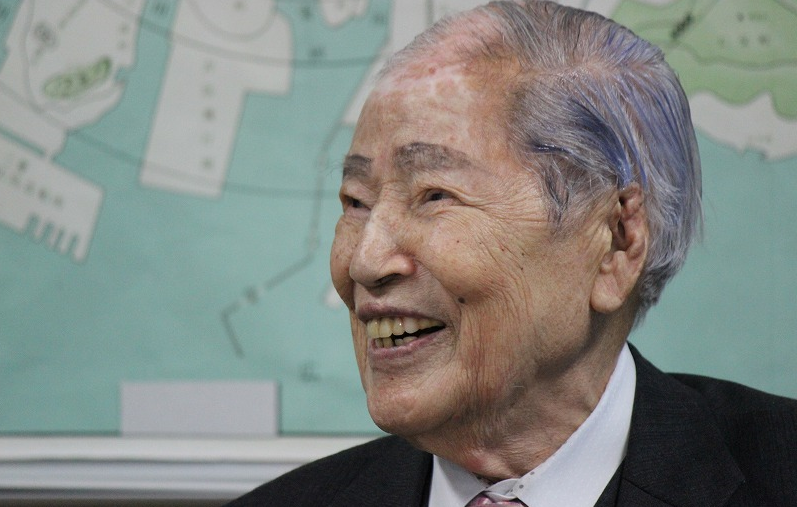 After the A-bomb was dropped on Hiroshima, I thought “Stupid! Just wait, America. I’ll take revenge on you soon!." But when I met President Obama, I didn’t say the he should apologize to us.

Why did I change? Because when I was a teacher, there was no TV.
So, I began to research in the library whether what I knew was a mistake or not.

You know, I experienced the atomic bombing  when I was 20 years old.  At that time, mythology was included in politics. There was no way Japan lost the war because we thought Japan was God. So, I became a militaristic boy.

After becoming a teacher,  reading many books helped expand my views widely.

Going abroad also helped me a lot. Even now, I have “Stupid! America…”at the bottom of my belly.

But I have to get over it. If you wonder how I can get over it, it is because I think about “The happiness of humanity”. I think ”We do not need nuclear weapons to be happy”

I think President Obama also thinks the same way as I do. You will talk to someone about what you heard today. I think it is the most important thing. It’s good that there are people who have different ideas than I do. Even so, we should talk.

The wisdom of humanity is not about the creation of the atomic bomb. Making an atomic bomb isn’t part of wisdom.

Humankind has really amazing power. So we must not give up.  If I die tomorrow, there won’t be any suffering. Everyone should take care of their bodies. And do their best not to be sick. Because, our bodies come first.

Thank you very much for listening to my story.